BOOK XVI. ADMINISTRATION OF JUSTICE BY THE COURT

Ottoman Majalla
BOOK XVI. ADMINISTRATION OF JUSTICE BY THE COURT 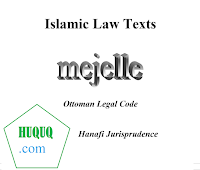 1784. The phrase administration of justice embrace the judgment and the duties of the judge.
1785. The judge is a person appointed by the Sovereign for the purpose of dealing with and settling actions and disputes arising between the people in accordance with the terms of law.
1786. The judgment consists of the stopping and settlement of disputes by the judge. Judgments are of two classes.
The first class consists of the Court giving judgment whereby the person against whom the judgment has been given is forced to give up the subject matter of the action as where he orders the thing claimed to be given. This class of judgment is called an obligatory judgment, or a judgment for something which is due.
The second class consists of the Court forbidding the plaintiff to bring an action as where it informs the plaintiff that he has no right to bring an action, and that he is forbidden to do so. This class of judgment is called a judgment by way of dismissal.
1787. The subject matter of the judgment consists of the obligation imposed by the Court upon the party against whom judgment is given. Thus, an obligatory judgment consists of recognizing the right of the plaintiff, and in an action by way of dismissal consists of obliging the plaintiff to give up his action.
1788. The losing party is the person against who judgment is given.
1789.The successful party is the person in whose favor judgment is given.
1790. Arbitration consists of the parties to an action agreeing together to select some third person to settle the question at issue between them, who is called an arbitrator.
1791. A deputy defendant is an agent appointed by the Court to represent a defendant who fails to appear in Court.
CHAPTER I. JUDGES

SECTION I. QUALITIES REQUISITE IN A JUDGE

1792. The judge must be intelligent, upright, reliable and firm.
1793. The judge must have a knowledge of Islamic Law and jurisprudence and of the rules of procedure, and must be able to decide and settle actions in accordance therewith.
1794. The judge must be of perfect understanding. Consequently, any judicial act performed by a minor or an imbecile or a blind man or a person so deaf that he cannot hear the statements of the parties when speaking loudly, is invalid.
SECTION II. CONDUCT OF JUDGES.

1795. The judge must abstain from any act or deed of a mature injurious to the dignity of the Court, such as engaging or selling, or making jokes while in Court.
1796. The judge may not accept a present from either of the parties.
1797. The judge may not accept the hospitality of either of the parties.
1798. The judge must abstain from any act during the trial likely to arouse suspicion or cause misunderstanding, such as receiving one of the parties alone in his house, or retiring with one of them with his hand or his eye or his head, or speaking to one of them secretly or in a language not understood by the other.
1799. The judge must be impartial towards the two parties. Consequently, the judge must observe complete impartiality and equality towards the two parties in everything relating to the trial of the action, such as causing them to sit down during the course of the trial, and when looking towards or addressing them and this whether one of the parties is a person of high rank and the other of low estate.
SECTION III. DUTIES OF JUDGES.

1815. the judge must hold the trial in public. He may not, however, reveal the nature of the judgment before it is pronounced.
1816. When the parties are present in Court for the purposes of the trial, the judge shall first of all call upon the plaintiff to state his case. If he has previously reduced his claim to writing it shall be read over and confirmed by the plaintiff. He shall then call upon the defendant to answer. Thus, he shall inform the defendant that the plaintiff makes such and such claim against him, and shall ask the defendant to reply.
1817. If the defendant admits the claim, the judge shall give judgment on the admission. If he denies, the judge shall call upon the plaintiff for his evidence.
1818. If the plaintiff proves his case by evidence, the judge shall give judgment accordingly. if he cannot prove it, he has a right to the oath, and if he asks to exercise such right, the judge shall accordingly tender the oath to the defendant.
1819. If the defendant swears the oath, or if the plaintiff does not ask for the oath to be administered, the judge shall order the plaintiff to give up his claim upon the defendant.
1820. If the defendant refuses to take the oath, the judge shall deliver judgment based upon such refusal. If the defendant states that he is prepared to swear an oath, after judgment has been so delivered, the judgment shall remain undisturbed.
1821. The content of a judgment or of a document issued by the judge of a Court in the ordinary way and which is free from any taint of forgery or fraud, may be acted upon and judgment given thereon, without the necessity for any proof by evidence.
1822. If the defendant persists in keeping silence and refuses to answer either in the affirmative or negative, after being questioned as stated above, his silence in considered to amount to a denial.
If he states that he neither confesses nor denies, his answer is considered to amount to a denial.
In both cases the plaintiff shall be called upon to produce evidence.
1823. If the defendant instead of admitting or denying the plaintiff's claim, puts forward a counter claim, action shall be taken in accordance with the matter mentioned in the Book on Actions and book on Evidence.
1824. Neither party may interrupt the other while he is making a statement. If he does so, he shall be prohibited therefrom by the Court.
1825. The Court shall provide a competent and reliable interpreter for the translation of statements made by any person who does not know the language of the parties.
1826. In the case of actions brought by relatives or in cases where there is a possibility of the parties coming to a settlement, the judge shall advise the parties one or twice to come to a settlement. If they agree, a settlement shall be drawn up in accordance with the terms of the Book on Settlements. If they do not so agree, the case shall be tried out.
1827. After the judge has concluded the trial, he shall give judgment and make it known to the parties. He Shall then draw up a formal judgment containing full reasons for the decision and orders given. A copy thereof shall be given to the successful party and, if necessary, a copy to the party losing the action.
1828. Once the judge is fully in possession of the facts and reasons for the judgment, he may not delay promulgation thereof.
CHAPTER II. JUDGMENTS

SECTION I. CONDITIONS ATTACHING TO A JUDGMENT

1841. Actions relating to rights concerning property may be settled by arbitration.
1842. The decision of an arbitrator is valid and executory only in respect to the persons who have appointed him, and the matters he has been appointed to decide. He may not have reference to any person or deal with any matters other than those included in the terms of reference.
1843. More than one arbitrator may be appointed, that is to say, two or more persons may be appointed to give a decision in respect to one matter. Both plaintiff and defendant may each validly appoint an arbitrator.
1844. In the event of several arbitrators being appointed as above, their decision must be unanimous. One alone may not give a decision.
1845. The arbitrators may, if they are duly authorized thereunto by the parties, appoint another person to act as arbitrator. They may not do so otherwise.
1846. If the arbitration is limited as to time it ceases to be of effect after the expiration of such time. Example: An arbitrator appointed to decide a matter within a period of one month as from a certain date, may only decide such matter within that period. He cannot give a decision after the expiration of that month. If he does so, the judgment will not be executory.
1847. Either of the parties may dismiss the arbitrator before he has given his decision. If the parties have appointed an arbitrator, however, and such appointment has been confirmed by a Court duly authorized thereunto, the arbitrator is considered to be a representative of the Court and cannot be dismissed.
1848. All decisions by arbitrators as regards the persons and matter in respect to which they have been appointed are binding and executory to the same extent as the decisions by the Courts concerning persons within their jurisdiction. Consequently, a decision validly given by the arbitrators in accordance with the rules of law is binding on all parties.
1849. A decision by an arbitrator, upon submission to a properly constituted Court, shall be accepted and confirmed, if given in accordance with law. Otherwise, it shall not be so confirmed.
1850. The parties appointing the arbitrators may authorize the arbitrators, if they think fit, to make a settlement, and such arbitrators may then make a valid settlement. Thus, if each of the parties appoint a person to act as arbitrator with power to dispose of the matter in dispute by way of settlement, and such arbitrators duly arrive at a settlement in conformity with the terms of the Book on Settlements, such settlement and arrangement is binding on both parties.
1851. Should an authorized person act as arbitrator in a dispute and give a decision and the parties later agree to adopt his decision, such decision is executory. (See Article 1453).